June and July 2014 - Dad and I left home in California Thursday June 25th, and drove all the way to Santa Rosa in northern California that day.  I got to stop in lots of rest stops, and Dad stopped at two missions - San Miguel Mission, just north of Paso Robles, California, and Soledad Mission just south of Salinas.  I've got pictures of me at each Mission, just to prove that I was there.  I can't really call them a selfie, cause Dad took the pictures, not me.  My paws just don't work well with the camera.

On Friday, we drove clear up to Brookings, Oregon so Dad could visit with friends.  I really, really like this place.  Dad's friend Archie took Dad out for dinner, but I couldn't go in the restaurant.  But the next morning, I did get to eat breakfast with Dad and Archie, cause they sat outside to eat.  Dad let me have a few bites of his Egg McMuffin.

On Saturday, after we left Brookings, we drove to up the coast to a town called Gold Beach.  Dad saw a store called Woofs Dog Bakery, and bought me a couple of treats.  He also had to get gas for the car.  While we were getting gas, another car pulled in that had two Staffordshire Terriers in it.  They barked at me, and I barked at them.   Their human talked to Dad and asked him what kind of dog I was.   Nobody seems to know what a Catahoula is.  At a town called Florence, we turned away form the beach and eventually ended up in Olympia, Washington so Dad could visit with other friends.

At Dad's friends house in Olympia, I got to play in their "dog yard."  They used to have a dog, but haven't had one in a long time, but the dog yard is still there.  We spent the evening there until I acted up so much Dad had to take me back to the hotel.  The next morning, Sunday, Dad's friend Ralph took us to the Olympia harbor.  I liked it there,  There were lots of fish smells, and there was a big park.  We stayed there for a couple of hours so Dad could talk with his friend, and I got to watch the kids playing.  Occasionally, someone would come by with a dog, so I barked at them to warn them to stay away.  I'm protecting Dad.

Then we went to Spokane later that day and had dinner in Spokane.  It's pretty close to Couer D'Alene, so we didn't have to drive much on Monday.  That's good, cause Dad had work to do, and worked at the computer and was on the phone with his office most of the morning (but only after we had breakfast and he took me for a long walk.

Dad was looking for property in northern Idaho, so Monday afternoon we drove to a place called Spirit Lake and I got to play in the water.

Tuesday morning we met with a real estate broker and drove about 50 miles to a place called St. Maries so Dad could look at a property there.  I liked it.  It was 160 acres and had a stream running through it.  I got to play in the water again.  I also got loose when Dad tried to put me back in the truck, and ran about a quarter mile down the road.  I didn't come back for about 15 minutes.  I just needed to run around. After that, Dad drove clear down to Boise, and that's where we spent the night.

Wednesday we drove to Idaho Falls, but with lots of stops along the way.  Our hotel in Idaho Falls was right across the street from the falls.  There was a really long park along the river, and I got to go all long the park, and meet new people, and look at the waterfall.  Dad got some pictures of me there.  Dad's cousin Hap met us for dinner, and we had a lot of fun.  Then we went to Hap's house.  I found a cat in the workshop and chased it.

The next day, July 3rd, we drove to Salt Lake City and had lunch in Pioneer Park with Dad's friend Marla.  It was great to have a picnic lunch.  And there was a dog run inside this big park where Dad took off my leash and let me run free.  That was a lot of fun.  I saw another dog there, so had to bark at it to keep it away from Dad.  After lunch, we drove to Orem to visit cousin Sherrie.  They have a really nice house, and I really like their daughter Cheryl.  She's one of my friends now.  We spent the afternoon there, then drove down to St.George for the night.  Dad drove late cause he wanted to be able to drive all the way home tomorrow.

Below is a picture of Dad's new Jeep.  He bought it just so we could make this trip.  He said he didn't want to drive the old Jeep.  He gave it away.  You can see me sitting in my copilots seat. 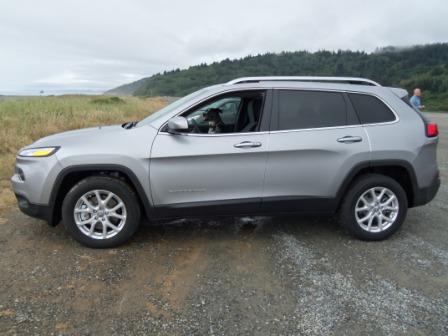 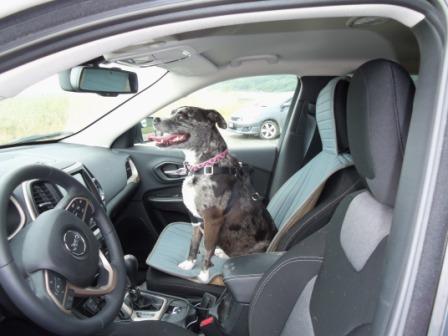 Next are pictures of me at the San Miguel Mission.  I wouldn't cooperate with Dad so he could get a picture of me at the Soledad Mission.  Dad said he wanted me to see a couple of missions.  He's been to almost all of them.  Some old guy named Junipero Serra, a Spanish priest, built all these missions a couple of hundred years ago. 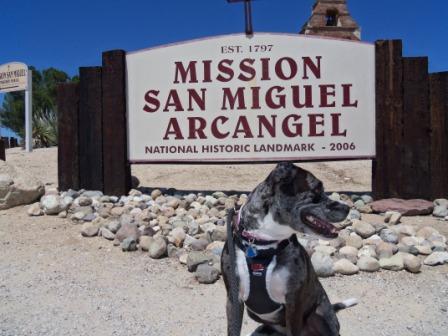 Dad told me this was great, I got to go over the Golden Gate bridge.  But, cause it was foggy, I didn't get to see it all that well.  I had to look over the rock fence to see it, and Dad couldn't get a picture of both me and the bridge.  But I was there, trust me. 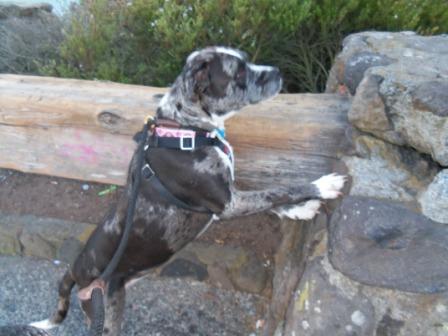 Wow.  Redwoods are really big trees. We've got a couple of pine trees in my back yard, but they're not this big.  The first picture is where we stopped for lunch.  The next pictures are when we stopped at a rest stop.  I got to walk down a long trail in the trees, and sniffed at a fern.  I never saw one of those before.  They smell different. 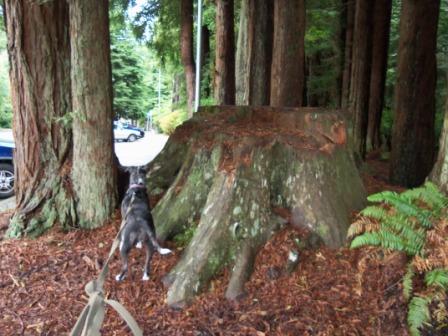 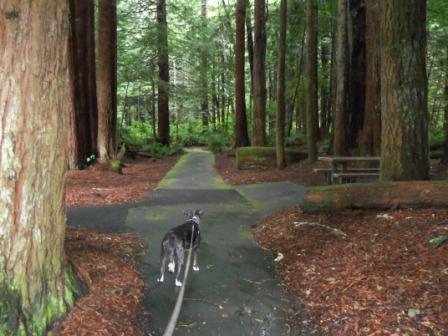 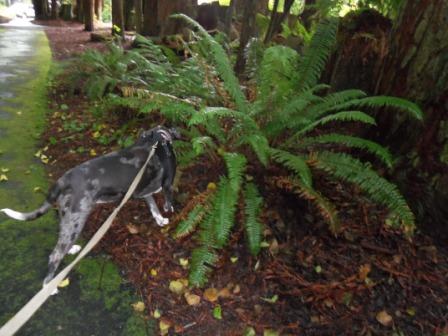 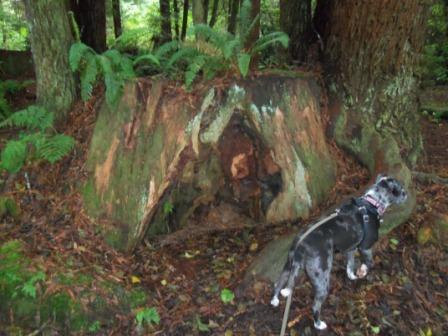 And then there was this huge beach after we left the redwood forest.  Dad took me out on the sand so I could run and stretch my legs.  I needed that, I've been sitting in the Jeep too long.  I haven't been to the beach in two years.  I forgot about the "moving" water.  I'm still a little confused by it, and all that white foam on it.  I like water, I just don't like that foam. 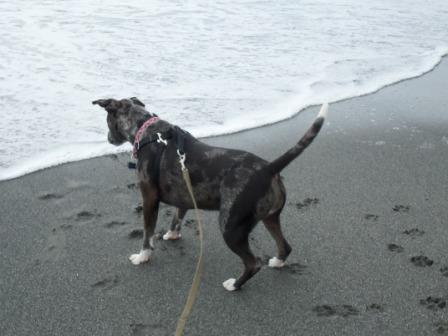 This is Dad's friend Archie.  Last night he and Dad had dinner in a restaurant and I couldn't go inside.  Stupid place.  But Saturday morning, we had breakfast together at a fancy restaurant called McDonalds.  Don't tell Mom, but I got part of Dad's Egg McMuffin.  But breakfast was after I got to run on the beach.  Here's a picture of the beach Dad took from a meadow near our hotel.  This is Harris Beach.  The next picture of of Arch Rock, which we saw north of Brookings as we made our way up to a place called Gold beach. 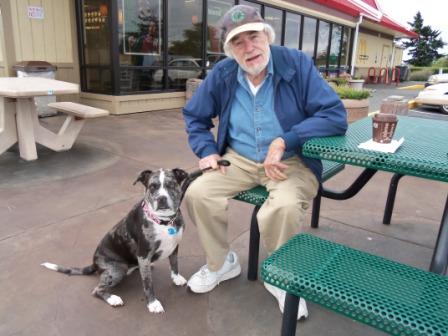 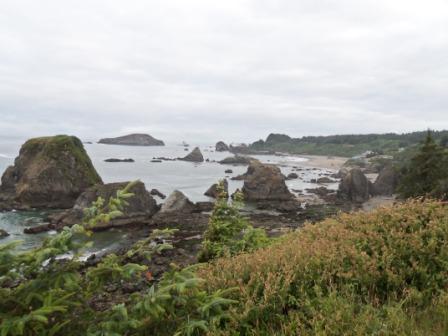 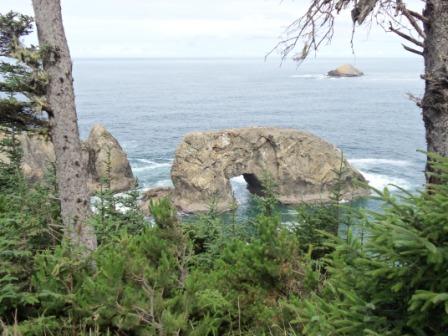 These pictures are of me playing at Harris Beach.  I found a rock on the beach and jumped up on top of it.  Dad says I'm weird, cause I jumped right in the tide pool, but I'm afraid of the waves.  And I found a starfish.  I've never seen one of those before.  And I saw a crab, but it was too quick for Dad to get a picture.  Dad says the whole California coast used to look like this when he was a kid.  The I found Harris Creek and ran up through the water in the middle of the creek for about a hundred yards.  Until I saw the seagulls standing on the beach.  I couldn't stand that, so I barked at them and chased them.  I didn't catch any, but I scared them all away. 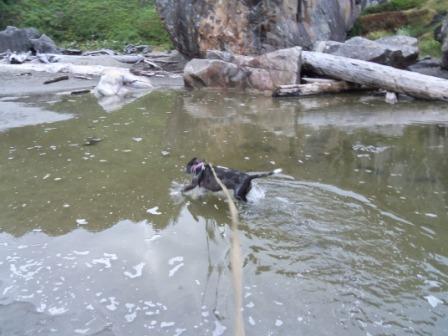 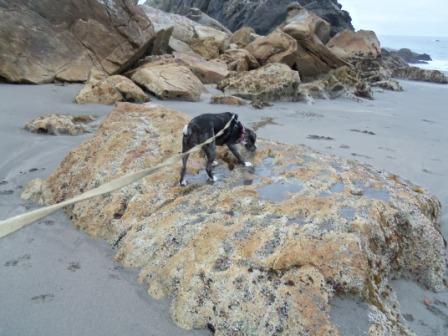 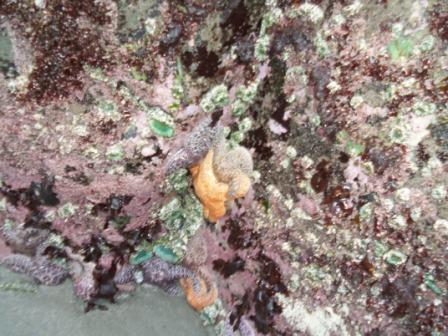 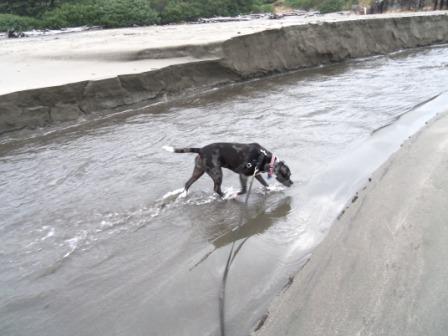 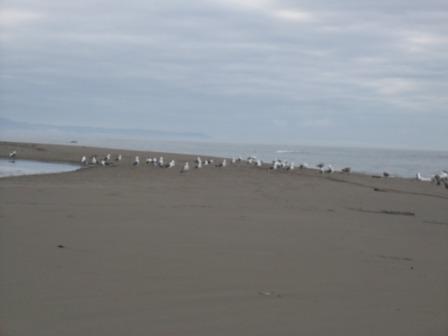 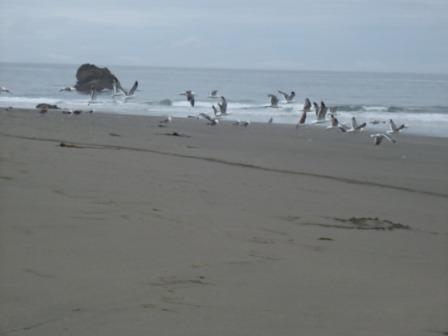 Next we went to visit Dad's friends in Olympia.  But Dad only took one picture of me at Olympia Harbor, cause they spent all their time talking.  I liked the harbor.  After leaving there, we went to Spokane, then to Couer D'Alene, Idaho.  It's really pretty there, with a big lake. 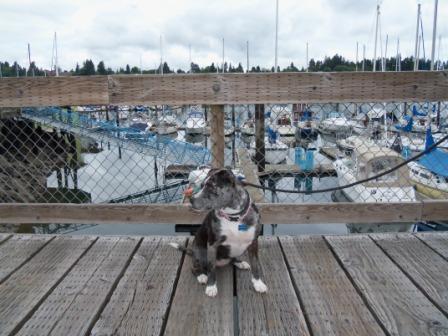 We also made a side trip to Spirit Lake.  And, of course, I played in the lake.  Dad saw some homes for sale here, and really liked the lake, but the lots were too small and too expensive. 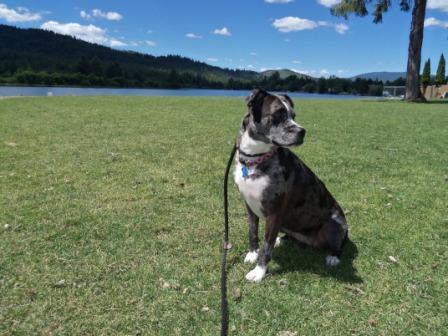 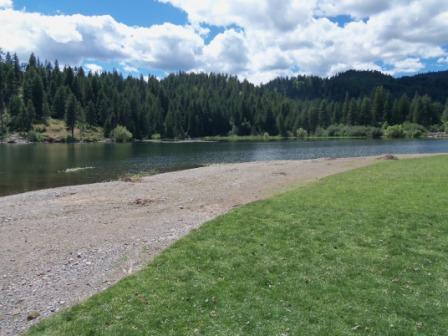 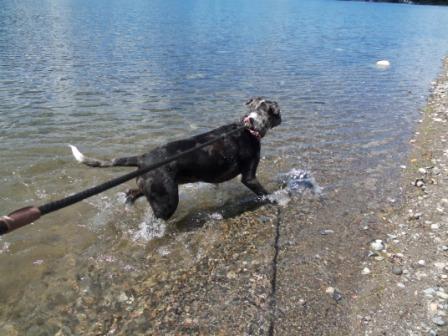 Dad was looking at property.  This is me at the top of the road in the property in St. Maries.  The road is a half mile long.  Then we drove to Boise to spend the night, and started to Idaho Falls the next morning.  Dad took these pictures of the Oregon Trail, with the Snake River in the background.  Dad told me his grandmother, when she was a little girl in the late 1800's, came across the Oregon Trail in a wagon train. 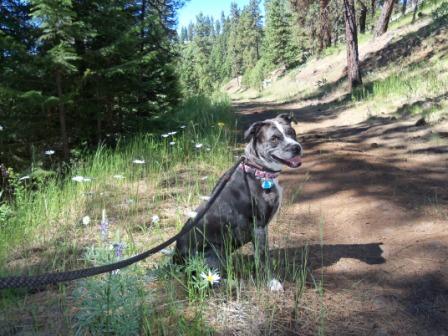 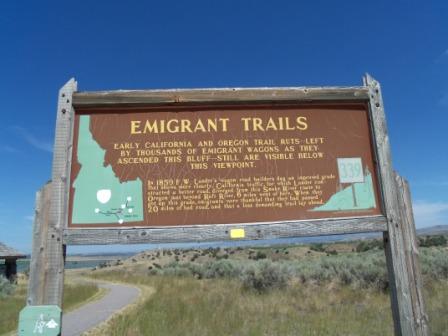 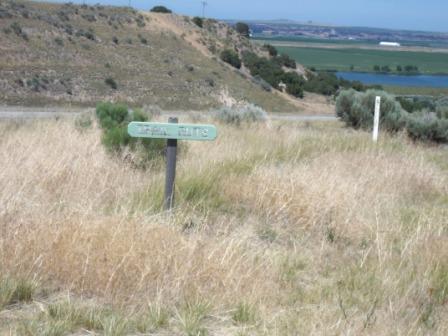 Next is Idaho Falls and a visit with cousin Hap.  That's me at the falls.  And a stupid moose made out of metal, with grass growing out of him.  What a sight.  And the rifle belonged to Dad's great grandfather.  He got this rifle after the civil war, and it got passed down through the family  Hap has it now, and will pass it along to his son.  Dad told me this was the first time he ever got to touch this gun.  It has special meaning to him since he did all the research on his great grandfather's civil war adventures.  Great Grandpa Knight apparently fought in 32 battles, but was taken prisoner of war on his 22nd birthday and spent the last nine months in Confederate prisons, mostly in Andersonville. 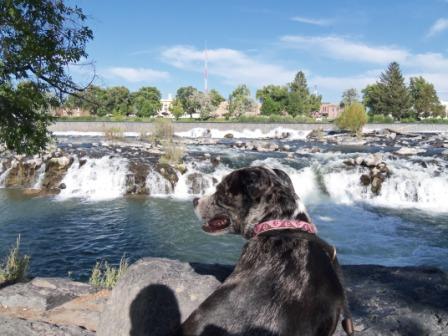 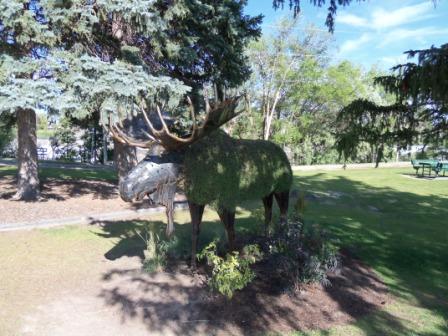 This is Pioneer Park in Salt Lake City.  And that's the dog park. 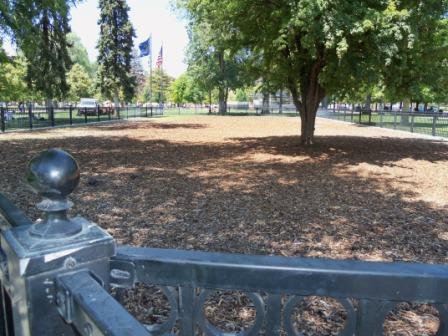