Mom takes me to Vicki's Pampered Pets in Ventura where I get a bath and a complete grooming.  So far, I've been only  once, on March 9th.  This was just a week after I was adopted, and Mom wanted to make sure I was really cleaned up.

I behaved so well that I received an award. 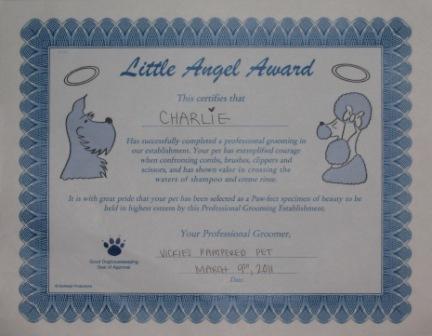 Mom hasn't taken me back since then.  I asked Dad about that, and he said that it was a waste to take me to the "Spa" since I spent so much time playing in the waterfall.  Mom said that doesn't make me clean, it just makes me smell like wet dog.

July 19th I went back for another bath.  They didn't give me an award this time, but they showed me that they had a picture of me cause they thought I was so cute.  They also trimmed my nails.  I didn't like that, and fought them, but they're bigger than me and trimmed them anyway.