My home sits right on the edge of the California Sespe Condor Preserve, and every now and then we see one of the big guys stop by our house. There’s an abandoned telephone pole just a few feet from my backyard fence, and the Condors sit on the pole to rest. The one in this picture has a wing span of about 7 feet. 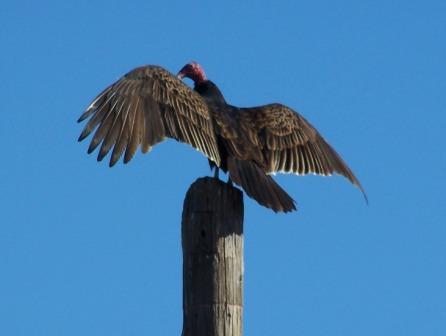 He’s just lucky he’s way up there where I can’t get to him, or I would show him a thing or two. As it is, I just bark and eventually scare him away. Usually he ignores me for a while before he gets scared enough to leave.

This is MY yard; he can’t come here. It’s my job to scare him away. Eddie explained that to me.  Eddie is trying to teach me what my jobs are around here.  I mean, beside generally causing trouble, chewing on things I'm not supposed to chew on, and pooping in the yard, I'm supposed to protect the house and Mom and Dad.

This guy comes to visit about once a month. Maybe more often, but that’s all we see him. Our neighbors down the hill also have an abandoned telephone pole by their back yard fence, but theirs has a cross piece on it where the insulators and wires used to be. One day, when Eddie scared this guy away from our yard, he flew down to the neighbor’s pole, and joined two other Condors there. Mom got a picture, but didn’t have her telephoto lens on, so it isn’t really big enough to tell what they are. That’s a shame, as Dad says a single picture of three Condors in the wild is probably pretty rare.

If you want to see more Condor pictures, look at my December 1, 2011 blog.  We had a new Condor come visit, and I think he's even bigger.