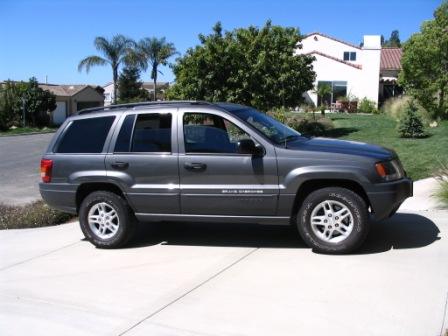 Dad usually takes me for a ride in the Jeep. Sometimes Mom will too, but she usually takes me in her little Honda CRV. I like the Jeep better, cause the back seats lay down flat.  That gives Eddie more room to move around, and lets my crate sit on a nice flat surface.  Soon I'll outgrow the crate and join Eddie free in the back of the Jeep.

Here is a picture of my Jeep.  Mom calls this the Dogmobile, because it's primarily used to haul Eddie and I around.  It's dark gray, so it matches at least part of my fur.  No self respecting female dog would be seen in a car that clashes with their fur.

There's really no reason for Mom and Dad to have three cars; I mean, it's just the two of them.  So the Jeep really is for me, and Eddie.

Dad has his own car too; the Mustang. 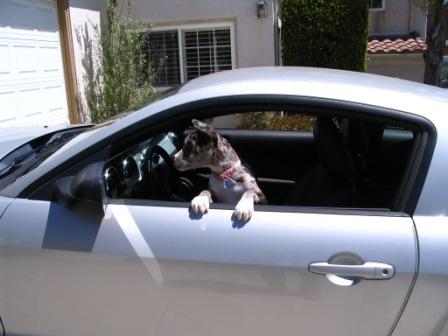 But what’s REALLY fun is to go for a ride in Dad’s Mustang. He says I’m not supposed to ride in that car; it’s not for dogs (I think he’s trying to tell me I’m a dog). It’s a cool car.  I know I'm not supposed to be in this car, but it matches my fur better than the Jeep, so I like it better.  Here’s a picture of me in Dad’s Mustang.  I'm sitting in the front seat cause there's more room.  I'm in the driver's seat cause Dad's not in the car, so I can sit where I want.  If Dad does get in and decides to take me for a ride, then I'll move over to the passenger seat.  The back seat is too small, plus I can't stick my nose out the window.

Now, if I could just learn to work the stick shift in this thing.  Automatic transmission isn't so bad, but a five speed?  I'm just a little girl.  I haven't figured that part out yet.

You can't really appreciate the Mustang from this little picture, so below is a picture of the whole car. 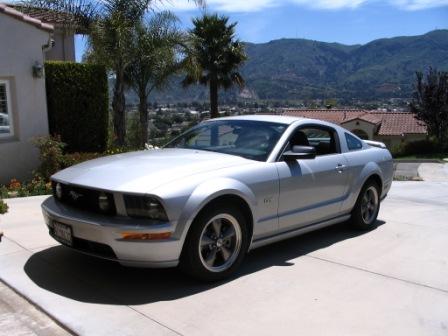